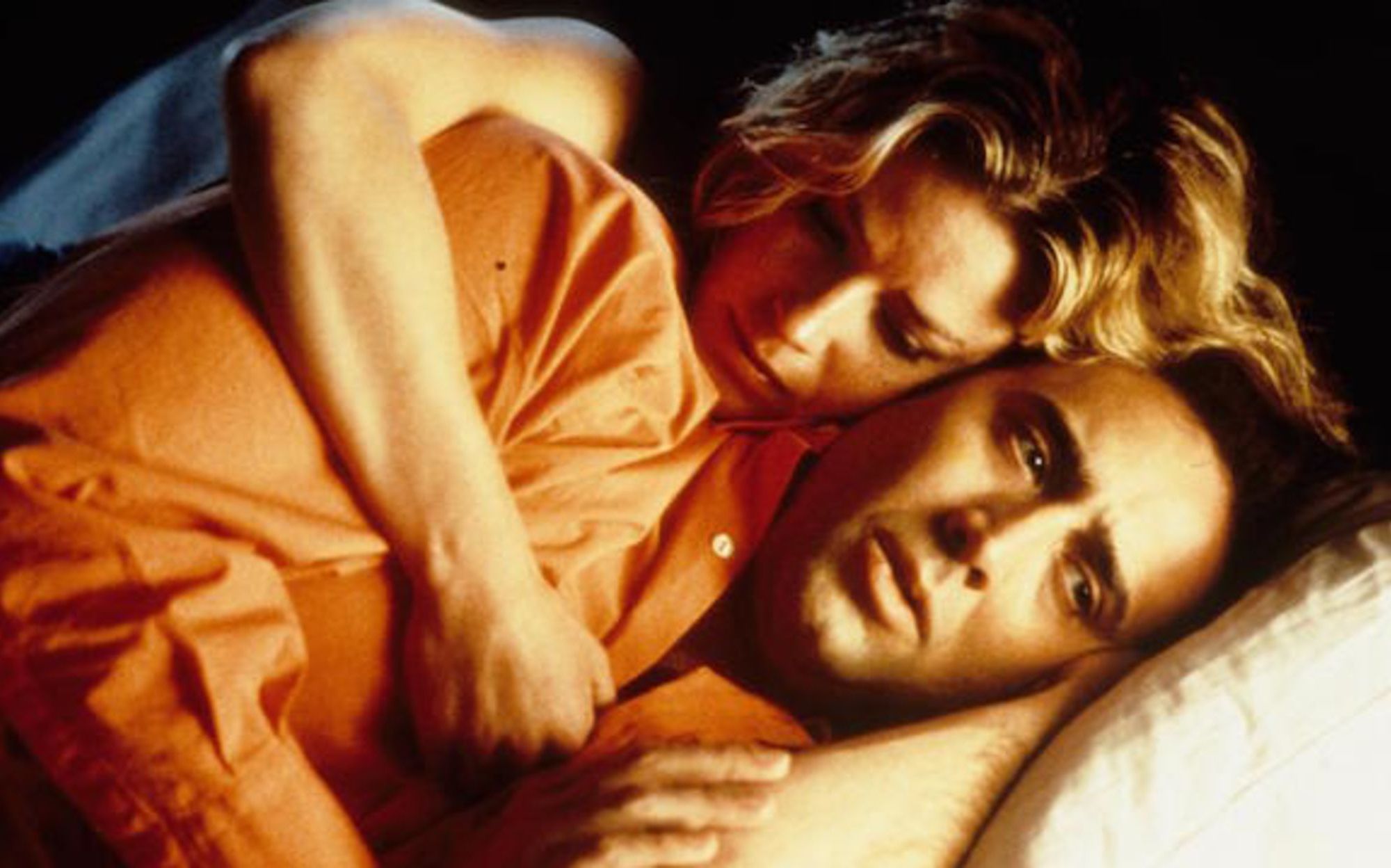 There are probably a great many people who will tell you that Nicolas Cage is a bad actor. That great many people, I imagine, haven’t seen Leaving Las Vegas or Adaptation. It’s not that Cage isn’t a great actor- he really can be, in the right role- he just chooses projects that are beneath him because, well, he spent just a wee bit too much money on castles. Make no mistake though: whether you see him as a joke or whatever, the man really can act, and Leaving Las Vegas is proof as to why.

I will honor Adaptation on my “Great Movies” segment someday, seeing as I have watched it again recently and believe it to be more brilliant than before. Yet I recently revisited Leaving Las Vegas again too, a film whose power is unshakable even just thinking about it. It had been a few years, but I remembered feeling that it was one of the best films of the 1990s. Revisiting it, I knew it was still true.

Leaving Las Vegas is a masterpiece of haunting power and emotion. It’s a film that begins as a downer, then lifts you up while holding you down. The film is centered upon two people who lead tragic existences, and yet find kindred spirits within each other for the same reasons. Yet even when they find love within each other, we know that tragedy still lurks. On paper, this sounds like it could easily be a Lifetime channel movie, but it couldn’t be anything further than that. Perhaps it’s because of the way that writer/director Mike Figgis frames this story. That, and because the two leading performances are so fully fleshed and realized that you forget that you’re watching Nicolas Cage and Elisabeth Shue, but rather, two wholly realistic people (and yet you’re also watching two actors in top form).

Cage plays Ben, recently divorced and recently unemployed. As the film opens, we are thrown in the middle of this man’s story, and yet we already have an understanding that he is at the end of his rope. He’s an alcoholic, but it’s worse than it sounds. I like to drink too, but Ben NEEDS to drink. He gets shakes and shivers if he doesn’t, hence why in the majority of the film, whether it be morning or probably even in the shower, Ben is drinking. We see all of this within the opening fifteen minutes or so, and it is then that Ben makes a decision: he is going to go to Vegas, and drink himself to death.

Shue plays Sera, a nice but unhealthily lonely Las Vegas prostitute. She is well aware of the profession she has chosen, and even after she sort of cuts off ties with her pimp, continues to walk the streets because, again, this is the life she has chosen. It is not a life she enjoys, and as we see throughout the film, it is much worse than we can imagine, but we wouldn’t want to imagine it.

Ben and Sera cross paths early upon Ben’s arrival to Vegas. He offers to pay her for the night, but not even for sex. Rather, Ben just wants to talk to her, and he just wants to listen. Probably because with his own drunken isolation, nobody has probably listened to him in God knows how long. Sera agrees to it, of course, because she also hasn’t had a proper human interaction in a long while. From here their relationship blossoms. She is well aware of the severity of his drinking, and he is well aware of her prostitution, and thus the two find love in each other because they are the only people who would give each other the time of day.

Rewatching Leaving Las Vegas, I was surprised to see familiar faces like Steven Webber, Richard Lewis, R. Lee Ermy, Danny Huston, and Laurie Metcalf. I had no recollection of their appearances, but rather, all that came to mind was Cage and Shue. It’s probably because Figgis’ direction and the two lead performances are so strong, we become pulled into the world of these characters, and while they’re not the only characters in the film, they feel as if they’re the only people in the world, and thus, nobody else really matters.

Cage won an Oscar here, and it’s really obvious why. He often acts in such a way that provides tremendous discomfort, and it’s because we know very well of his desperation and what really ails him. I probably would’ve given Shue the Oscar too, because she acting next to such a huge performance, and yet she still manages to hold her own. What Cage and Shue do in Leaving Las Vegas is difficult. Forming a romance onscreen can sometimes be unconvincing, and yet the two of them have a spark. Yet what makes it even trickier is the fact that Cage and Shue not only have to sell a romance, but they also have to sell a romance that is surrounded by depression and pain, and they sell all of it beautifully.

Leaving Las Vegas is not a film for the faint of heart. It’s an upsetting experience, but an undeniably great film in the way that it fleshes out two unfortunately lonely souls that many films are afraid to approach. It’s a film that would’ve worked due to the power it has, but works wonders due to its casting. It is, again, one of the best films of the 1990’s, and a reminder of how tremendous Cage can be with the right material.