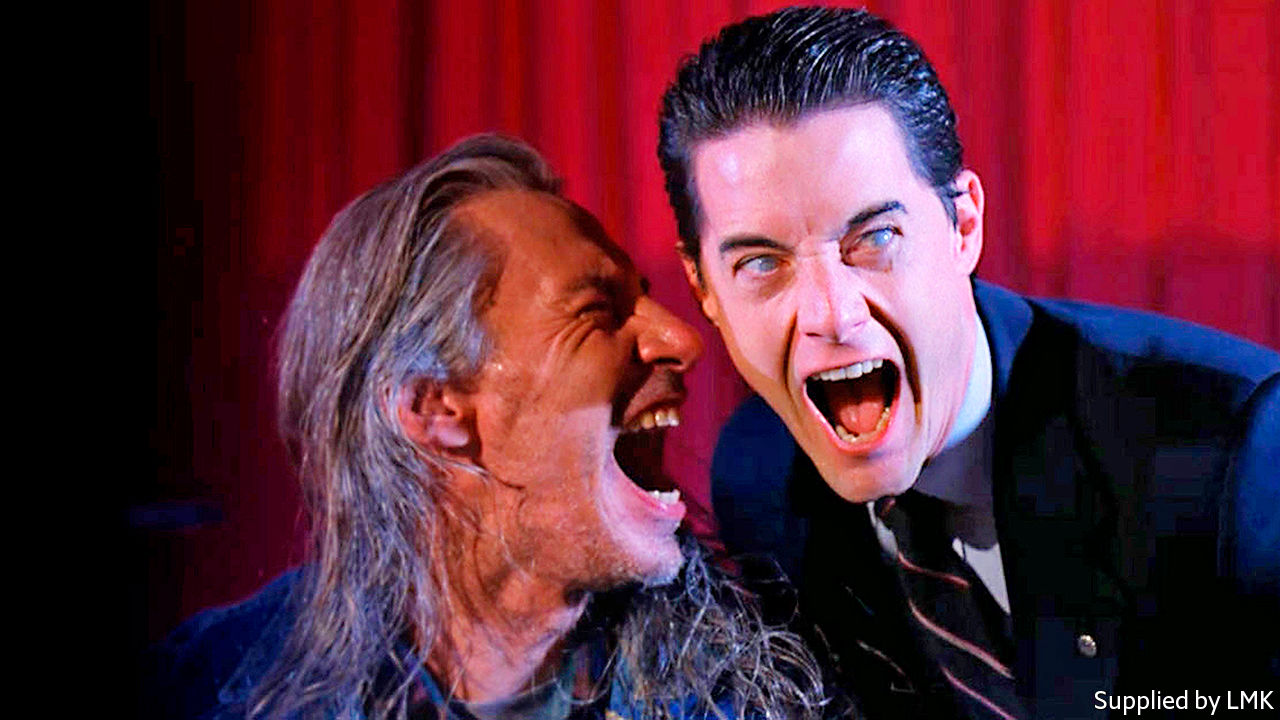 About a month ago, a new love for David Lynch’s filmography blossomed once again. A fan for about a decade, after revisiting Blue Velvet and Mulholland Dr. again, there was a sudden urge for… more. Having seen all of his films (except Inland Empire) in their entirety at least once, it seemed as good a time as any to dive back into his work. Trouble is, he hasn’t made a film since 2006, and probably won’t make any more. So, where else am I to turn? Well, I probably couldn’t consider myself a true Lynch believer without watching Twin Peaks, so watch Twin Peaks I did.

Here is a breakdown of how these posts are going to go: as I sit here typing, I have only watched the first two seasons. I will then revisit the movie, Twin Peaks: Fire Walk with Me (which was viewed under foolish circumstances, more on that later). Finally, I will dive into the third and most recent season, Twin Peaks: The Return.

Here is a show with a cult following so large, it’s hard to believe that it didn’t initially make it past the second season. Yes, for a show as talked about as Twin Peaks, the show met its end after the second season, which Lynch has widely admitted for hating. After finally seeing it, it is easy to say that I am probably apart of said cult. Mind you, it is not quite a masterpiece, and for reasons that will be discussed. Yet Twin Peaks has enough creativity, humor, and intrigue on its side that it (mostly) held me in its grip.

With this show, Lynch was really ahead of his time. Most television series’ at the time went episode-by-episode, in that each episode had a beginning, middle, and end, and then the next episode would be something else (though two to three part episodes weren’t out of the question). Twin Peaks essentially followed one main storyline, that branched off into other storylines. His inspiration came from The Fugitive- the TV series for which the film was based on, which followed, again, one main focus. This was also a bold move because it was on network television. Something like The Sopranos would find success with this kind of narrative years later, on a channel like HBO. Twin Peaks happened to be on ABC, and it also happened to be, at times, pretty darn weird. Again, ahead of its time.

The main focus of the series is that of Laura Palmer (Sheryl Lee). Set in the picturesque town known as Twin Peaks, the show opens with the murder of Laura Palmer, and it essentially moves the plot in motion. Kyle MacLachlan is a big ball of charming wonderful here as FBI agent Dale Cooper, a coffee and pie lover who is brought in to solve the mystery. The series also focuses on the other residents of Twin Peaks, and the drama that is brought to the surface while all of this is going on.

Laura Palmer was… quite the wild child. A beauty pageant queen of the sorts, she has multiple affairs that are brought to the surface, as her boyfriend Bobby (Dana Ashbrook) comes face-to-face with her other boyfriend, James (James Marshall), who is also in love with Palmer’s best friend, Donna (Lara Flynn Boyle) and also Palmer’s cousin Maddy, who looks just Laura. Because it’s the same actress. If that sounds like a lot of drama, let me just say that that is only ONE of the storylines at play, as there is quite the ensemble here. The mystery surrounding Laura’s death is also pretty much always in the background, seeing as it’s a rather strange case. Strange in ways that one cannot even imagine.

The first season is excellent. In about eight episodes, the show doesn’t reveal Palmer’s killer, and yet keeps us on our toes nonetheless. The second season is where things get a little… odd. Not that things weren’t odd in the first (the third episode, directed by Lynch himself, was pure Lynch). Apparently though, ABC grew impatient with the mystery behind Laura Palmer and they forced the writing team to reveal the central mystery… eight episodes in. Which wouldn’t be a problem, except there were 22 episodes total.

What held my interest at that point was Cooper, and the mystery surrounding “The Black Lodge.” With season 2, more and more characters are thrown into the mix, and some of their storylines didn’t pull me in quite as much, mostly because I just wanted to know about The Black Lodge (more on that in a bit). Things also get a smidgen campier in season 2. Take the character of Nadine. Nadine is married to Ed, who is the father of James. In the second season, the cycloptic Nadine develops super-strength and also develops the mindset of a 12 year old girl, returning to high school and falling in love with a high schooler. It’s a really strange sight. There’s also David Duchovney in drag, but that one I excuse because the show does have a good sense of humor.

MacLachlan is a delight here, with a supporting cast that is also pretty strong. Lynch himself here is a hoot as a fellow agent with a hearing problem, and Miguel Ferrer gets his moments too as a sarcastic fellow agent. Even when the newer members to the cast didn’t quite leave an impact, it was usually refreshing to see quite the overload of familiar faces.

The best moments in Twin Peaks are the ones that feel pure Lynchian. Perhaps the strangest, but also the most chilling, is the reveal of Laura’s killer. This has got to be one of the most unsettling sequences ever put to network television. If that isn’t an envelope pusher, I don’t know what is… actually, I do: the show’s final episode (well, until the 2017 revival). How Lynch got away with an hour of television so strikingly, uniquely weird will forever remain a mystery.

What also remains a mystery is why people stopped watching it. With this finale, I imagine 1990’s ABC thought that Lynch had gone too far. Yet considering the very last scene, who wouldn’t want to know what happened after that? As for why people jumped off board, yes, things did get a little weird and dragged out after Palmer’s killer was revealed. Lynch himself hates this second season because he didn’t want the killer to be revealed so early, which is understandable. The second season would’ve been much better if it had been a little tighter- maybe 10, 15 episodes at most. Yet the main mysteries surrounding Twin Peaks are so intriguing that it doesn’t hardly matter. The series left me wanting more, and thankfully, there is more.