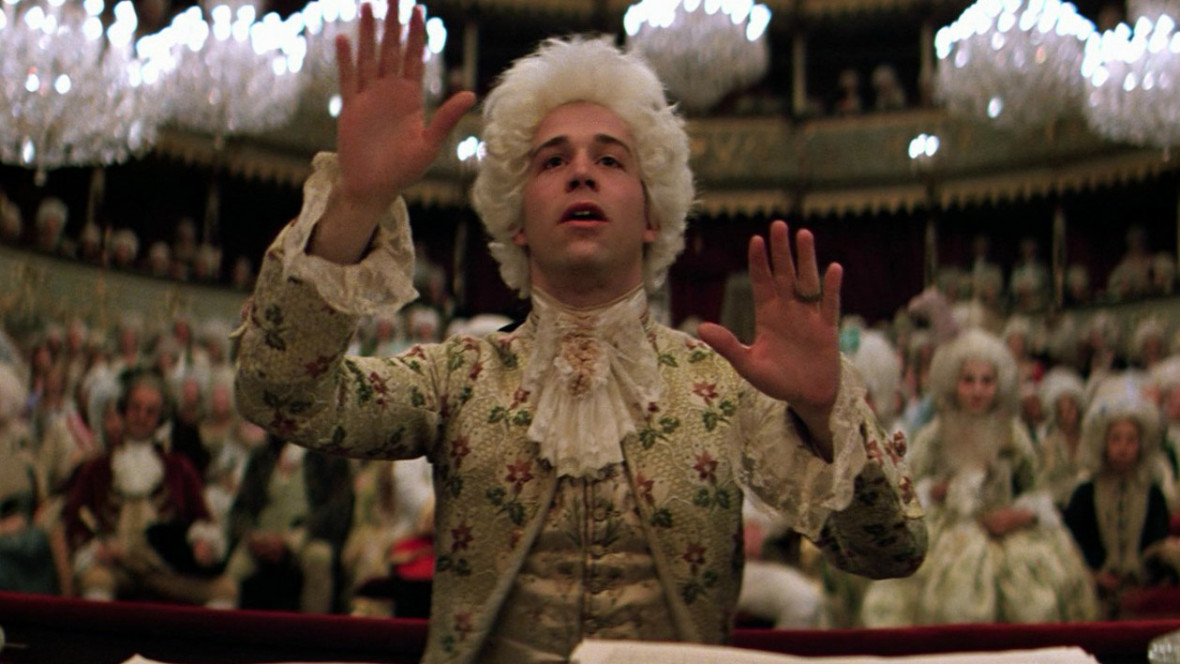 Alright, so for the next month or so, on every Saturday and Sunday until Oscar Sunday (April 25th), I’m going to discuss random movies that happened to nab the Best Picture Oscar, and I’ll dive into whether or not these movies were actually worthy/ what their competition looked like. Some of these choices were right on the money… others raised a few eyebrows. In any case, I thought this would be a little fun and a nice little stroll down memory lane… or, well, I’d have fun.

One thing you’ll notice when looking at the Best Picture winners over the years is that sometimes, despite their bone-headed calls, they do manage to get it really right. Milos Forman’s Amadeus, Forman’s second Best Picture winner following One Flew Over the Cuckoo’s Nest, was one of those times. I worshipped the ground that Forman walked on, and it will shock you to know that Amadeus is actually my THIRD favorite of his films. Yet, it’s still pretty amazing. That, ladies and gentlemen, is the magic of the late, great Milos Forman.

First, let’s just talk about how stunningly gorgeous this film is. Of the film’s 11 Oscar nominations, the film went home with 8 awards. One of them, surprisingly, wasn’t Best Cinematography (that went to Chris Menges’ equally gorgeous work in The Killing Fields), but man, Miroslav Ondricek’s work in Amadeus is a wonder; it more than just dazzles the eye. To make up for this though, the Academy did reward the film for Best Costume and Production Design, because duh. I re-watched Amadeus a few months ago and I was flabbergasted (that’s right, flabbergasted) and in complete awe by the production values in this film. Everything here looks so remarkably gorgeous, so unbelievably expensive, I guarantee you everyone involved in it felt pretty fancy.

I’ll dive into the plot, and then what makes the film as special as it is. Amadeus tells the story of the (fictional) rivalry between Antonio Salieri (F. Murray Abraham) and Wolfgang Amadeus Mozart (Tom Hulce). It’s not so much a rivalry as it is a jealousy. The film is told from Salieri’s point of view, as we see him as an old man in a mental institution recalling how he, as he puts it, “killed” Mozart. You see, Salieri was a composer himself and he loathed Mozart because he was young, attractive, childish even… but also a musical genius. The unfairness of this fuels his anger, and the film focuses on Salieri’s attempt to rise to power, Mozart’s rise to power, and Mozart’s ultimate fall from grace.

There have been times over the years where I’ve docked a movie for historical inaccuracy (believe it or not, it wasn’t one of the many reasons I disliked Bohemian Rhapsody). Yet Amadeus is one of those that I’ve sorta let get away with it, because it’s all done so well. Plus, wouldn’t it be way more interesting if this was how it all went down? The historical inaccuracy notion I have learned to drop over the years, because a movie is a movie; movies are meant to entertain, and sometimes, the truth just ain’t as interesting.

Forman’s film here is wonderfully entertaining, even if you don’t know your Mozart from your Wagner. What’s unique about it is the multiple tones that Forman is able to successfully achieve. The film is, occasionally, dark and rather haunting… but it’s also got a pretty good sense of humor. Yet back to the dark and haunting, I absolutely love that ending- it conveys the madness that Salieri has felt all of these years, and even though he’s in a mental institution, he’s very much in his own element; he wasn’t a star in the real world, but he’s definitely the star of the institution.

The two performances are a marvel, too. Both Abraham and Hulce were in the Best Actor category, which nowadays doesn’t happen; usually, they split Actor and Supporting Actor… unless you’re this year’s Judas and the Black Messiah. Hulce is wonderful here as someone who is flawed, but also, weirdly perfect. Yet this is Abraham’s show- Amadeus might be the name of the movie, but this is Salieri’s film. Abraham’s performance in this is remarkable; a real mood-ring of a performance that defines the word “range.”

Amadeus won Best Picture over the likes of Roland Joffe’s aforementioned The Killing Fields, Norman Jewison’s underrated A Soldier’s Story, Robert Benton’s Places in the Heart, and A Passage to India, the final film of the late David Lean. I enjoy all of those films, in particular The Killing Fields and A Passage to India, but the Academy still made the right call on this one. Forman’s film is one that has passed the test of time, and will continue passing it. It’s great entertainment, and in an added bonus, it’s utterly gorgeous. Again, the Academy doesn’t always get it right- in 1984, they neglected to nominate Wim Wender’s Paris, Texas for a single award. But when they do get it right, they get it very right, as they did here.

Did Win: Sally Field- Places in the Heart

Should’ve Won: Field or Judy Davis- A Passage to India

Did Win: Peggy Ashcroft- A Passage to India

Did Win: Places in the Heart