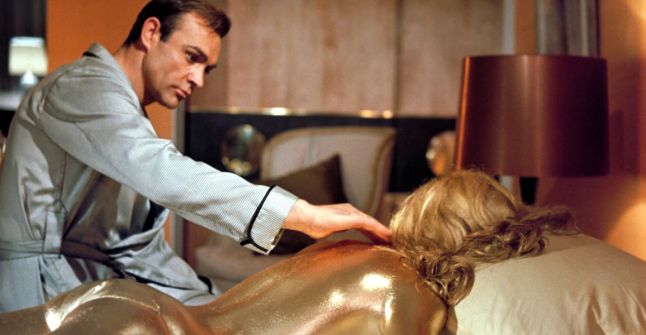 I’m not sure if I’ve ever discussed this on this page, but for the last 15 years, I have been a big fan of the James Bond series. I started watching them as a nine year old and even though some aren’t so great, they are usually at least pretty entertaining. I remember how proud I was of myself when I memorized each of the movies in chronological order… again, I’m a dork. So with the arrival of Bond’s next outing, No Time to Die, finally hitting theatres next month (as a Bond-aholic, November is a more fitting month, but it’s whatever), it seemed like an ample time to stroll down memory lane.

Re-watching these movies the past few days, I’ve really grown to realize the evolution of these films, and just how the filmmakers tampered with the formula. Dr. No was a good film, but not a great one- it was on the cusp of greatness, in that all of the pieces were there, but they were still testing the waters. From Russia with Love reached the greatness, in that it was thrilling, smart, sexy, and everything you ask for from a Bond film. Yet it’s Goldfinger that took it the extra step. Because while those first two films had their share of action and intrigue, Goldfinger is an action extravaganza; a film that begins hot, and zips by in such a brisk manner that an hour flies by and you barely notice. Yet this is meant in the best way imaginable.

Watching the later Bond films, it’s easy to see just where they got their start, and it, quite simply, came from Goldfinger. The first film walked, so From Russia with Love could run, and Goldfinger could run further. Of the three films, it was the most action packed, with spectacular, unforgettable set pieces. Its villain (the dude with the Midas touch), the title character, was the most colorful, flamboyant, and memorable. The women are striking and beautiful. Hell, the images in this film are striking and beautiful. From its cinematography to its production design. Yet I’m talking about the images that come to mind themselves. Basically, if you’ve seen this film, you can probably close your eyes and imagine a huge chunk of it:

That, and more. Goldfinger is the quintessential Bond film. It’s hugely iconic, slyly funny and sexy. It’s also utterly nuts, but in the best way imaginable. It’s a lot of movie, and all of it sticks the landing beautifully. AND, in just under two hours. It’s a beaut.

Anyways, to the plot. The film opens with an interlude, and then is preceded by Bond entering the hotel room of a woman named Jill (Shirley Eaton) who is helping her boss, one Auric Goldfinger (Gert Frobe, who kind of reminds me of one of The Three Stooges), cheat at a card game. Bond interrupts them, and naturally, she swoons over him and they sleep together. You know, that old chestnut. Well, their lovely evening comes to a crashing halt when Bond is knocked tf out, and when he wakes up, Jill’s dead, and covered in gold. My thing is, is this a mark Goldfinger is known for leaving? Is she actually painted in gold? In the time Bond was out cold, was she abducted and thrown in a vat of gold? Was she dead, and then thrown in the vat? Eh, whatever, it looks cool. And iconic as hell.

So Bond, knowing that it must be Goldfinger, searches for him and tracks him down. While doing so, he finds himself being captured and practically taken along for the ride. All the while, he stumbles across Goldfinger’s master plan, which for once, isn’t taking over the world. Known as “Operation Grand Slam,” Goldfinger intends on knocking out everyone in Fort Knox, Kentucky (close to where I live, believe it or not) and stealing the largest supply of gold in the world. Helping him do this is his quietly frightening henchman Oddjob, who is pure muscle, and who throws a hat that is either really deadly, or his throw is really deadly. He is also helped by (wait for it) Pussy Galore (Honor Blackman), an energetic pilot who is also a strong match for Bond, and who also runs a flying circus with her weird fem-bot pilots (it’s hard not to think about Austin Powers sometimes).

One thing I noticed revisiting Goldfinger is that this is one of those where Bond doesn’t really make it out of a fight easily. Usually it seems like the guy can take on henchman while making it look kind of easy, but this time, the guy is really put through the ringer, constantly being chucked around and pretty much being an equal match for whoever he’s up against. The filmmakers certainly made a wise decision in not having Connery go toe-to-toe with Frobe very much, if barely at all. To make up for it though, Oddjob and Ms. Galore do most of the heavy-lifting. Oddjob is a frightening presence, in that he can snap your neck with a friggin’ hat, and he’s a man of few words, but he usually has a creepy grin on his face. Galore and Bond duke it out a few times, but yet you know that even she won’t be able to resist him. Who could? But P.G. does make for an interesting Bond girl in that she isn’t a damsel, she holds her own, physically, against Bond, and that she’s something of an anti-hero.

Everything about From Russia with Love worked wonders. The same can be said about this film, too, and this time, it’s somehow even better. Like most sequels should strive to do, Goldfinger looks for what worked before, but instead of simply doing it over again, it finds ways for improvement. It’s a rollicking great time from beginning to end. From beginning to end, the film is terrific entertainment; a shoot-the-works action thriller that works like a charm. This is the Bond film that every Bond film strives to be. Its villain is colorful and over-the-top, yet slimy and effective; its Bond girl sexy, cool, and iconic; the action sequences and set pieces a knockout; and Bond, even when he’s being tossed around, is still the coolest guy around (dangnabbit, thish review shtill washn’t written in Connery’sh dialect, exshept thish line). It’s the Bond-iest of the Bond films, and it just might be the best.

James Bond, and I, will return with Thunderball.