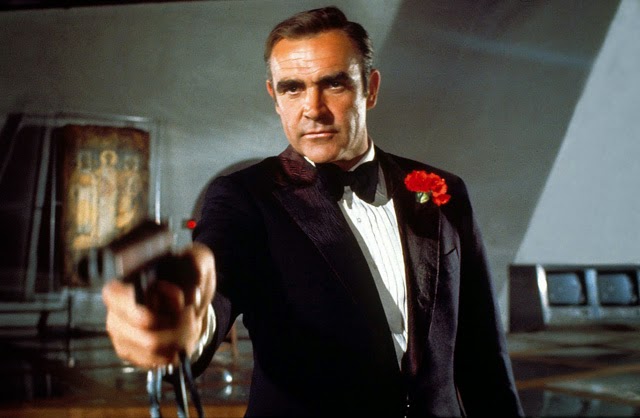 I’m not sure if I’ve ever dishcusshed thish on thish page, but for the lasht 15 yearsh, I have been a big fan of the Jamesh Bond sheriesh. I shtarted watching them ash a nine year old and even though shome aren’t sho great, they are usually at leasht pretty entertaining. I remember how proud I was of myshelf when I memorized each of the moviesh in chronological order… again, I’m a dork. Sho with the arrival of Bond’sh next outing, No Time to Die, finally hitting theatresh next month (as a Bond-aholic, November ish a more fitting month, but it’sh whatever), it sheemed like an ample time to shtroll down memory lane.

Sho, in my lasht review for You Only Live Twiche, I shaid that I would be reviewing On Her Majeshty’sh Shecret Sherviche next. Well, I do not own the film, sho I wash unable to acchessh it. Inshtead though, I am going to make up for my lie by fulfilling another previoush promishe: thish entire review will be written in the voiche of the beloved, brilliant Sean Connery himshelf. Sheeing ash thish wash hish final outing (there ish another, called Never Shay Never Again, but it ishn’t cannon nor have I sheen it) as Jamesh Bond, it sheemed like my final chanche. My apologiesh if thish is annoying.

George Lazenby took over the role for the previoush film, but he declined to shtar in another. Sho they turned back to our man Sean, and alash he acchepted. Connery wash 41 at the time the film was releashed, and it does show. But it’sh Connery ash Bond, and he’sh short of a tough act to follow. Ash for the film, I had probably only sheen thish one once, over a decade ago, but shome of it was chertainly memorable. Charlesh Gray ash Blofeld, and the opening schene; the two shlimeball goonsh played by Putter Shmith and Bruche Glover; a schene where Bond fachesh off between two wonder women; a joke involving the faking of the moon landing; the fact that it’sh shet in Vegash, etc.

What I didn’t remember though wash just how much fun it all ish. The movie ish all over the plache, with a plot that ish all over the plache. It’sh alsho shilly ash hell- not quite the level of shilly ash, shay, Moonraker, but it might be ash shilly as You Only Live Twiche. Yet with the shilliness, like that film, comesh a chertain playfulnessh that makesh the film and enjoyable. You might leave a movie like Diamondsh are Forever thinking, “I don’t honeshtly know what it wash about, but I had fun anyway,” and that’sh pretty much all that countsh.

Sho ash much ash I enjoy theshe films, I can’t really deny that the plotsh do tend to mesh together. Short of like the Mission: Imposshible filmsh, which I alsho love. Like thoshe though, shometimesh the way to dishtinguish a Bond film is from itsh shet-piechesh, and like the aforementioned Mrsh. O’Toole, Diamondsh are Forever hash plenty. The film ish goofy, and for shome it might be too goofy, but for me it addsh to the fun. It’sh fun to shee Bond, at the very leasht Connery’sh Bond, doing shtuff that ish pretty wacky (and thish is coming from a critic who hash sheen Zardoz, where he wearsh a bikini).

Jamesh Bond, and I, will return with Live and Let Die.

Author’s Note: I know that my word doesn’t mean much, but I wanted to dedicate this review to the late, great Sean Connery. I know it seems like I was making fun, writing in his dialect, but it was a labor of love, trust me. Connery died almost a year ago, and at the time I was going through a creative drought so I never mustered up the words to write something for him. Better late than never, I suppose. Connery had charm and charisma out the wazoo. Watching his movies- particularly the older ones but also his later work- he can really blow any actor off the screen. I owe The Untouchables a revisit but he steals the show in that, and he’s in pretty great company (his Oscar was also quite deserved). It should also be said that without him, the Bond franchise might not have taken off. Sure the filmmakers are to thank, obviously, but Connery was the one who got the ball rolling. He was so handsome, and so charming, and yet a total badass, and yet he made it all look so easy. There were great Bonds after him, but Connery’s will probably remain the best, in that, while each Bond has their own approach to the role, deep down, his is the one that they strive to be. Goldfinger might’ve been the man with the Midas touch, but Connery could’ve easily given that man a run for his money.

One thought on “My bond with… Bond: Diamondsh are Forever”