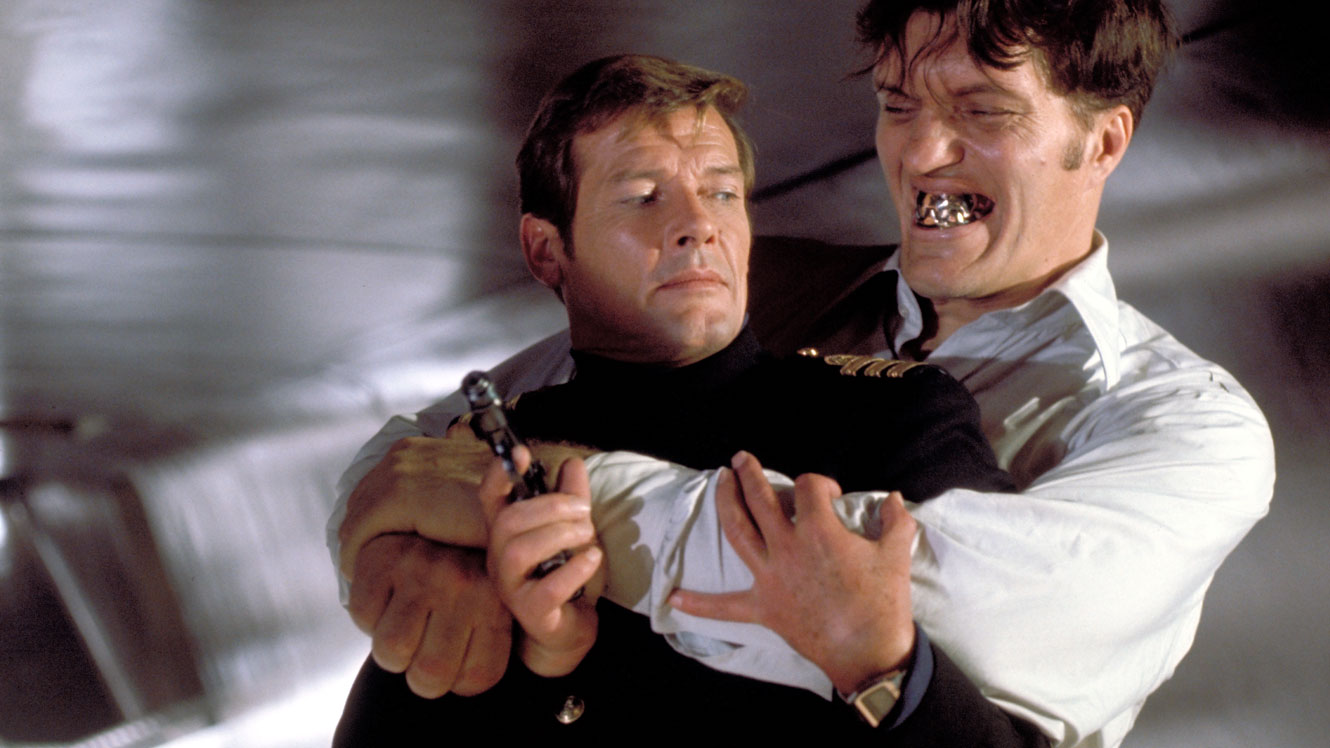 I’m not sure if I’ve ever discussed this on this page, but for the last 15 years, I have been a big fan of the James Bond series. I started watching them as a nine year old and even though some aren’t so great, they are usually at least pretty entertaining. I remember how proud I was of myself when I memorized each of the movies in chronological order… again, I’m a dork. So with the arrival of Bond’s next outing, No Time to Die, finally hitting theatres next month (as a Bond-aholic, November is a more fitting month, but it’s whatever), it seemed like an ample time to stroll down memory lane.

The Spy Who Loved Me is the 10th James Bond movie, and Roger Moore’s third outing. It’s also his best, and one of my favorites of the series. As a Bond movie, it gets just about everything right. As a movie, it succeeds just as well. This is a rollicking, funky, richly entertaining, visual knockout. It’s very shagadellic, baby (it has been a while since I’d referenced my boy Austin Powers).

Believe it or not, this actually held the most Oscar nominations for a Bond film until Skyfall in 2012. The Spy Who Loved Me was nominated for Best Score, Best Production Design, and Best Original Song. With the first two, it lost to Star Wars, which is a shame, but I get it. The latter I’m not so forgiving. The song “You Light Up My life” won Best Original Song over the title song for this film, Carly Simon’s “Nobody Does it Better.” This is one of those Oscar choices that hasn’t aged well. “You Light Up My Life” is a fine song, but who is still listening to that? Simon’s song has passed the test of time.

I’m thankful to announce that The Spy Who Loved Me has too. My memory of this film was a fond one, and revisiting it the other night, I remembered why. This film of course checks off the boxes required to pull off a Bond film, and yet it’s like everyone brought their A-game here. Moore probably gives his best performance as Bond. Barbara Bach (the future Mrs. Ringo Starr) is a sexy force as the Bond girl. Richard Kiel is a curious presence: kind of like Jaws the shark, Jaws the person is terrifying presence, but we can’t get enough of him. Yet the real stars of the movie might be the technical wizards behind it. Everything in this film looks like a billion bucks, and even nearly 45 years later, the movie is still a beaut.

The film opens with a KGB agent named Anya (Bach) in bed with her fellow agent lover. Said lover then takes off to the mountains to find our man Bond (Moore), who is also in bed with a woman. To no surprise, she’s a traitor. This then leads to a spectacular sequence in which Bond skis away from his enemies (and pieces together a weapon from his skis that must simply be witnessed) before skiing off of a mountain and parachuting. This was before the days of CGI, and boy, is that sequence a marvel. All of this is set to a groovy score by Marvin Hamlisch, which is so 70s I can’t help but love it.

We then get the obligatory opening title song, the aforementioned “Nobody Does it Better.” Of all the Bond themes, I place this in second, right behind “Live and Let Die.” Because like that one, it’s one that I can easily listen to on my own (the song is indeed a banger, I’ve belted it out at many parties), but it’s just an added, cool bonus that the song was written for James Bond. Indeed, nobody does it better, and it makes me feel sad for the rest. Not to mention, the sequence itself does a splendid job of getting us hyped for the rest of the movie. And there’s plenty reason to be hyped for it.

The plot this time finds Bond teaming up with Anya to stop the villainous Stromberg (Curd Jurgens), who taken a naval ship hostage and intends on ruining the world, lah-di-dah. As a character, I won’t deny that this guy doesn’t make much of an impression. But… he does have two things going for him. One is an underwater lair named Atlantis, which, compliments of production designer Ken Adam (who did many of the designs for the previous films), is a marvel. The other is his henchman- the big, hulking and terrifying Jaws (Kiel). Why do they call him Jaws? Simple: his teeth are metal, and he can bite through metal bars, and he is even seen biting a shark at one point.

Jaws chases Bond and Anya around the globe, and I love the friggin’ sight of this guy. Besides this movie, Kiel is probably best known for his role in Happy Gilmore. Here, any time Kiel is on screen, you want him to stay. Apparently for the film’s ending, they filmed one in which Jaws dies, and one where he survives. The one where he survives made it to the final cut (and Jaws returns in the next film, Moonraker), and when it was revealed, the audience cheered. I can’t blame them. Bach is also among the better Bond girls. She’s not the most dimensional character, and yet she’s pretty present throughout the entire film, so she’s more than just a pretty face.

The Spy Who Loved Me is directed by Lewis Gilbert, who also made You Only Live Twice. He also made the Best Picture nominated Michael Caine vehicle Alfie, and would go on to make human dramadies such as Educating Rita and Shirley Valentine. How the same man made all of those is kind of a mystery, but as a Bond filmmaker, he really gets it all pretty right. The action sequences are a knockout. The locales are gorgeous and add to the globe-trotting fun. What the film lacks in its central villain, it makes up for with Jaws and atmosphere.

Moore and Bach might be the stars of this film, and they are kinda hot, I won’t lie. They get an ending that, thankfully, doesn’t recycle the whole, “happily ever after but wait there’s still henchmen living” ending from the previous movie. Instead it ends on a funny note (that, well, the next movie will recycle, but more on that later). In my eyes though, what I take away most from this film though is its look and its feel. Its spirit and style is so on point in The Spy Who Loved Me that it reminds you of what you enjoy so much about James Bond in the first place. It doesn’t quite reach the heights of Goldfinger or From Russia with Love, but as pure escapism and entertainment, indeed, nobody does it much better.