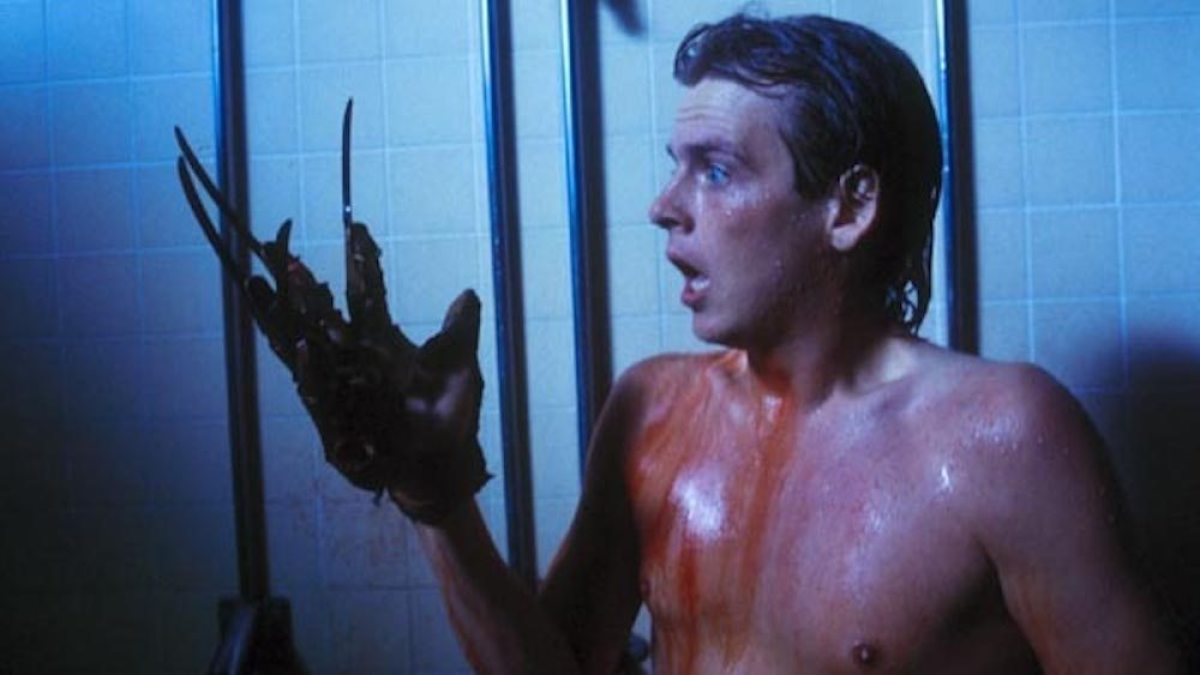 A Nightmare on Elm Street 2: Freddy’s Revenge is the interestingly bad sequel to the Wes Craven classic. Here is a movie that is clumsy and messy, but also so weird and bizarre in terms of its filmmaking choices that pretty much the entire time you ask yourself, “Why did they do that?” It is bad, but it is bad in ways that are sort of fascinating.

Craven’s first film has gone on to become a horror classic, and with good reason. The film was a major financial success too, so it was no wonder that New Line Cinema wanted to crank out a sequel. And crank it out they did, in less than a year after the original’s release. Truth of the matter was, the financial success of this film was going to either make or break the studio. Luckily, the film was financially successful. Is the movie actually successful though? Well, it depends on who you speak to.

See, I have a weird relationship with Freddy Kruger. I love him- I find him goofy and over the top and ridiculous but Robert Englund has such infectious fun with the role. But I’ve seen the majority of this series probably one time, and truth be told, I recall not enjoying most of them because they end up getting (wait for it) goofy and over the top and ridiculous. I intend on revisiting a good chunk of them this month so I guess we’ll see. What surprised me when revisiting this film is that it’s not quite intentionally campy and at times it at least feels like the original film. The problem though is in its execution, which not only feels as if the movie was made without a polish to the script but also features touches that are so strange and specific, you have to wonder what the motives were behind it.

So yes, A Nightmare on Elm Street 2: Freddy’s Revenge. Who is Freddy seeking vengeance on? Well… I don’t know. As you’ll recall in the original, Nancy’s mother explained that a group of parents joined forces to find Freddy Kruger and burn his ass to a crisp for being a pedophile. So he got his revenge in that film by targeting the teenage children of those parents. As for this one, there is no Nancy, nor her parents, or any of the characters from the first movie, or even the mention of this backstory. There is, from where I’m sitting, no mention of vengeance in Freddy’s Revenge, so why the hell did you call it Freddy’s Revenge? Freddy’s Rage seems more fitting, or Freddy’s Pissed.

Anyways, yes, Nancy (Heather Lagenkamp) is outta the picture this time, and instead is replaced by a young teenage fella named Jesse (Mark Patton), who is currently living in Nancy’s house from the first movie, some five years later. Does Freddy have a vendetta for this house? Nah, that’s a stretch. Anyways, Jesse begins having nightmares, yada yada. But soon he’s confronted by Freddy (Robert Englund) in one of them, and he essentially tells Jesse that he’s going to do his killing for him. So soon Jesse, with the help of his lady friend Lisa (Kim Myers who, quite astonishingly, looks like Meryl Streep, and that’s how I’ll refer to her for the remainder of this review), begins to unravel the mystery of why this is happening to him. Not only that though, soon the line between reality and nightmare begin to blur as he starts to suspect that he is, in fact, committing these murders.

So I keep making referring to the fact that this film makes a lot of choices that are jarring. To which I say, yes, it does. The big one, and maybe you’re aware of it, is all of the gay content. See, they never asked Lagenkamp to return at all, which means they must’ve really wanted to tell this story. But… why did they tell it this way? At one point, Freddy kind of strokes Jesse’s face. Why? Beats me. In probably the strangest development, Jesse, who, mind you, is a teenager, goes to a… leather bar where he picks up a guy and takes him back to his school locker room. What happens here? Well, Freddy and/ or Jesse tie him up, strip him naked, and whip his bare ass with towels. It’s really quite a strange sight. We also get a scene of Jesse dancing and shaking his ass all around his bedroom. Again, why did they go this route?

Apparently, there is a documentary out about the making of this film, told from the film’s star, Mark Patton. Patton is openly gay, but was in the closet at the time, and I don’t know if the crew knew that or what (nor have I seen the documentary) but that had to have been a bizarre, thoroughly uncomfortable experience. Having said that though, the guy does apparently credit himself as the first male “Scream Queen,” and by golly, he deserves that title. Everything mentioned so far about this film, I should say, is absolutely hilarious, but I won’t lie, perhaps the funniest aspect of Nightmare 2 is Patton’s scream. I hadn’t seen this movie in probably 10 years, but I remember those screams as clear as day, and they’re an absolute hoot.

The movie is too, but for how messy the whole debacle is. So, I’m not much of a stickler when it comes to plot holes and what not, and when you have a concept that is obviously as fictional as A Nightmare on Elm Street, is it really fair to be docking points for ridiculousness? Perhaps not, but that film had one basic rule: Freddy Kruger, through some sort of unexplained magic, has the ability to murder people in their dreams. Now, I get that this film was rushed into production and maybe they didn’t stop to ponder what they were doing, but on that regard, this movie doesn’t make any sense. And yes, I’m aware that the previous movie focused on a burnt dead man who murdered people in their dreams.

There comes a scene in which Mark and his family are attacked by birds. Is that Freddy’s doing, or… was this just thrown in for cheap suspense? Also, it turns out Freddy is able to control Jesse and Jesse is indeed killing people through him. But… none of this transpires in sleep. The towel whipping, the bird, none of it. Nor does a pretty strange pool party sequence at Meryl Streep’s house, where Freddy officially takes over Jesse’s body and attacks the party. I say this sequence is strange because it goes on for so long, and it feels like it doesn’t belong in the movie. Not to mention, at the end of the movie, nobody really reflects on the fact that a psychotic burnt gentleman in a red and green sweater attacked a group of idiotic teenagers. Instead, they just tell Meryl Streep about how great of a party it was. Was it all a dream or does the movie simply not make sense? Well…

Nightmare 2 is, in short, a mess. A goofy, clumsy but also pretty entertaining, laughably silly but fascinating one. It was obviously a movie made for money and it shows, but it also feels as if it was made with other motives as well. It is admirable that Meryl Streep made time for this material (all jokes aside, I definitely see why Jerry and Kramer went gaga for her on Seinfeld). What is also admirable as at least they were trying to make something in the spirit of the original. They just made something of a debacle in the process. I do however love a practical effect in which Freddy crawls out of Mark’s body. It’s an awesome little trick, and it’s quite frankly the highlight of this messy little footnote.